Our Board of Directors

John is the co-founding and managing partner of Chu, Ring & Hazel, LLP, where he focuses on the representation of growing enterprises, venture capital, transactions, and mergers and acquisitions. Chu, Ring & Hazel serves as counsel to the Foundation. John and two of his partners, Jim Ring, and Will Hazel, have also co-founded Fair Outcomes, Inc (www.fairoutcomes.com), which provides and online embodiment of a patented escrow system that reduces the inefficiencies associated with bargaining and dispute resolution.

John graduated from the University of Chicago with a B.A. in Anthropology, and he earned his J.D. at the Columbia University Law School.

John is  a member of several national and local bar organizations and has served in various leadership roles with the Boston Bar Association and Boston Bar Foundation. He also serves as Director of Discovering Justice (www.discoveringjustice.org), and is a former member of the board of trustees of the Citi Performing Arts Center (formerly the Wang Center).

John is married to Lorrayne Dina Chu, and has one adult daughter, Danielle, an aspiring documentary filmmaker. He continues to play competitive soccer and enjoys traveling.

Lori is a stress and trauma healing professional who is known internationally for using EFT/Tapping in her work with hundreds of orphan genocide survivors in Rwanda. Lori founded the non-profit organization Create Global Healing and established Project LIGHT: Rwanda – the world’s first international youth healing, heart-centered leadership and entrepreneurship program.  Project LIGHT nurtures our next generation of young people to heal, work and lead us into a peaceful future.

Since December, 2012, Lori has been collaborating with The Tapping Solution Foundation leading their Newtown Trauma Relief and Resiliency Project to support those traumatized by the Sandy Hook Elementary School tragedy in Newtown, CT.

Lori is the author of The Grace Process Guidebook and The Stress Management Handbook: Strategies for Health and Inner Peace. She currently shares the heart of what she’s learned using humor, life stories, and interactive exercises. She radiates the joy of the inner peace she has found for herself, and sparks our imagination for the possibilities of achieving world peace through inner-peace and outer good works.

Kenneth Proudfoot is an entrepreneur, author, teacher, musician, filmmaker, and gyotaku print artist. He is a strategic marketing consultant, and grant writer for schools and non-profit organizations.

He serves as the Dean of the School of Professional Development at Kenney College and serves on the college’s Board of Governors. He was previously Associate Professor of Entrepreneurship and Founding Director of the Larry Friedman International Center for Entrepreneurship at Johnson & Wales University and has taught entrepreneurship thinking to students, business owners, and government leaders in 25 countries.

Ken served four years in the U.S. Peace Corps and is bilingual Spanish. He is a member of Histwick, Wickford Art Association, Jamestown Art Center, and the Gilbert Stuart Birthplace & Museum. He is the founder of 100 Entrepreneurs. He is the author of 40 Things Fishermen Can Do To Raise The Value of Their Catch, Children’s Book of Home Rules and the forthcoming Life & Business Philosophy of Austin T. Levy, Visionary Entrepreneur (2014).

His most recent documentary is “The Amazing Life & Times of Austin T. Levy.”, profiling the little-known stories of Levy’s enormous local impact during his lifetime and prolific legacy. Austin T. Levy’s entrepreneurship and visionary investment in the community transformed the village of Harrisville in the town of Burrillville in northwest Rhode Island in the early 20th century. The 55-minute film premiered in Harrisville, Rhode Island on October 1, 2016. The film also had its broadcast premiere in February 2017 on WSBE-36, Rhode Island PBS.

He makes a home in North Kingstown, RI with his wife, Ann Marie Marshall. They have six grown children.

In addition to managing a Global Programs team that provides strategic support and overseas operational oversight, Willis manages three other divisions within the Global Programs Office. These are the (a) Study Abroad division through which close to 2,600 students a year enroll in almost 100 different study abroad programs in more than 24 different countries, (b) the International Students and Scholars Office which provides immigration support to over 7,000 international students, and (c) the Center for English Language and Orientation Programs in which hundreds of students enroll in intensive English language immersion programs. In total, the Office of Global Programs is comprised of over 390 people working for the University in 14 countries in brick-and-mortar year-round operations.

Willis joined BU in 1998 and became Deputy General Counsel in 2005.  Prior to joining BU, he worked at Molten Metal Technology, Inc., a MIT spin-off technology company and the US EPA. Willis has served on many civic and community boards, and is a graduate of Emory University and Boston College Law School.  He also is a proud father of three active boys.

Helen is Lingzi’s aunt and the President of the Foundation. She works as a Vice President of Operations in Loan, Lease and Trade Division at Bank of America Global Leasing. She has been with the Bank since 2000.

Helen earned her Mechanical Engineering degree from Dalian University of Technology and earned her Master of Science in Accounting from Johnson & Wales University.

Helen has resided in Rhode Island since 1994 with her husband and their two children. Helen enjoys reading, gardening and walking on the beach in her spare time.

Meghan is the Foundation Administrator and a Corporate Paralegal and Office Manager at Chu, Ring & Hazel LLP. She has been involved with the Foundation since its inception managing the Boston Marathon Teams, planning fundraisers and events, and various other administrative duties.

Meghan joined Chu, Ring & Hazel LLP in October 2012.  She maintains corporate records, assists in filing state and federal reports (including Form D and Blue Sky) and conducts factual and legal research, along with managing the day-to-day operations of the firm. She is a 2003 graduate of Suffolk University and earned a Paralegal Certificate in May 2006. Meghan is a voracious reader of historical non-fiction and a lover of all cats. She enjoys music and spending time with her husband and daughter.

Lauren is a Boston native, born and raised in Dorchester. She attended Boston Latin School, UMass Amherst, and served the City of Boston under Mayor Menino in the Office of Neighborhood Services as his Dorchester Coordinator. She then pursued a career in law enforcement by joining the Boston Police Department in 2010 and later earned her master’s degree from Curry College in Criminal Justice.

Lauren responded to the attacks of the Boston Marathon in 2013 and saw the aftermath of its impact on the city, its residents, its visitors, its businesses, its survivors, its mourners and its victims. It was her background in the mayor’s office coupled with her professional experience that led to her involvement with the foundation.

She has been a partner since its inception and eventually ran the Boston Marathon for Lingzi in 2016. She continues to bring partnerships to the foundation and its commitment to the community and youth of the City of Boston through the Boston PAL program and Boston Police Bureau of Community Engagement. She is also a board member of the Dorchester Running Club and Cedar Grove Civic Association and a member of the Mass Association of Women in Law Enforcement (MAWLE).

She and her husband Ryan Woods continue to reside in Dorchester where they are raising their three children, Gavin, Ronan and Sloane. Ryan also serves the city as Commissioner of the Boston Parks Department.

Faith is a lifelong resident of Rhode Island where she lives with her husband and daughter.  She received her Master’s degree in Human Development and Family Studies with a special focus on Gerontology and has been working at the University of Rhode Island (URI) for over twenty years.  She has had the opportunity to be involved both in research and health promotion for older adults and more recently as project coordinator for the Rhode Island Geriatric Education Center at URI, helping to coordinate education for health professionals, families and caregivers who work with older adults and individuals with Alzheimer’s disease and related dementias (ADRD).

Faith started running about 15 years ago and has been fortunate to help support the Lingzi Foundation and also run the Boston Marathon as a charity runner for Team Lingzi in 2014, 2015, 2019 and 2020! She is currently a member of the Foundation’s Advisory Board and several subcommittees and has been involved in building partnerships with organizations such as Edesia and the Maddie Potts Foundation.

Ryan Winters is a native of Methuen, MA and graduated from Suffolk University in 2002. He moved to the west coast in 2003 and currently resides in Coronado, CA where he works as a studio manager for Barry’s Bootcamp (San Diego). His family resides in Boston and the Merrimack Valley area.

Ryan has been a life-long fitness advocate and became involved with The Lingzi Foundation in 2018 as a Boston Marathon charity runner for Team Lingzi. He enjoyed his experience so much that he joined Team Lingzi again in 2019 and 2020. He has thoroughly enjoyed the bonds formed with his fellow runners and all those affiliated with The Foundation. Ryan has drawn inspiration from meeting Lingzi’s family and strongly believes in spreading word of our mission and the mission of our Foundation partners.

He looks forward to crossing many more “finish lines” in honor of Lingzi’s memory.

Jessie is a two-time Boston Marathon runner, and a proud mother of three teenagers. She is an active community member and serves as an executive committee member of the Chinese American Association of Lexington.

Paul is a Telecommunications Administrator for Mass General Brigham, formerly Partners Healthcare Inc. started in 2007. Paul is a graduate from Northeastern University. He resides in Ipswich, MA with his dog “Minimum”. His interests are photography, traveling, sports, and the History Channel.

Paul has been involved with the Lingzi Foundation since the spring of 2018. Since then, he has photographed many of their events.

His aspiration is to run the Boston Marathon someday. 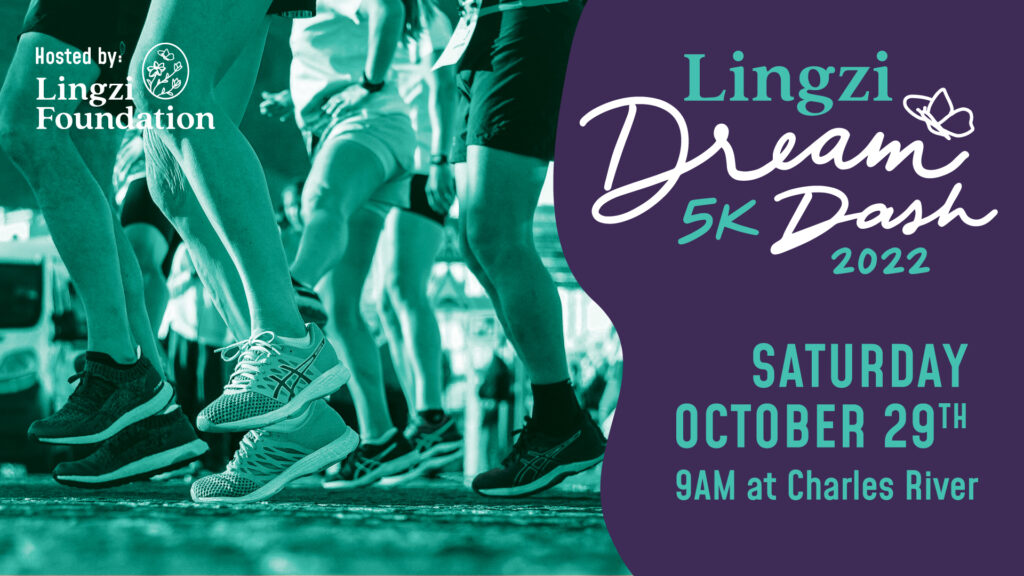